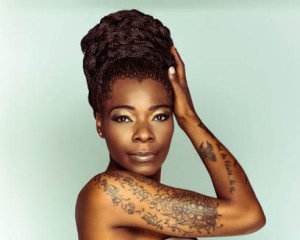 Over the course of her 15-year recording career, Buika, the Spanish-born singer of African descent, has continued to confound expectations. She has recorded a vast range of songs, employing an equally wide spectrum of sounds and collaborating with musicians from around the world. What unites Buika’s body of work is not genre, and not even just her voice, although it is immediately arresting and instantly recognizable to those who have heard it; The Los Angeles Times has said, “Though compared to Nina Simone, Billie Holiday and Edith Piaf, she sounds like no one but herself.” Listening to Buika’s discography, a pattern emerges of growing confidence and daring. On her aptly titled Vivir Sin Miedo (To Live Without Fear), she makes a striking departure from the Spanish raga flamenco, Latin jazz and world music for which she is known, into something best described as global pop. For the first time, she sings more in English than in Spanish (and often mixes the two). Warner Music Latina releases the album October 16.

Buika wrote or co-wrote all of Vivir Sin Miedo, which she co-produced with Martin Terefe (Mary J. Blige, Jamie Cullum, Coldplay) and recorded in Miami, New York, London and Madrid—a series of cities as global as Buika’s artistry. The ten songs draw upon reggae, ragga, Afrobeat, R&B, funk and gospel. The new sound is audible from the start of the album, the title track, which features lyrics in English and Spanish and a reggae rhythm that recalls 1970s Bob Marley. Buika co-wrote and sings the album’s first single, “Carry Your Own Weight,” with Jason Mraz, one of her many artist fans. Musically and professionally, the song brings to mind “7 Seconds,” the iconic Senegalese singer Youssou N’Dour’s collaboration with Neneh Cherry, which introduced him to a mainstream American audience in 1996 and remains a classic today. While “Carry Your Own Weight” reflects Buika’s growing connection to the U.S., where she has been based since 2011, she remains grounded in the music of her native Spain, collaborating on the song “Waves” with the great flamenco singer Potito.

In her work to date, Buika has already fulfilled the prediction that filmmaker Pedro Almodovar, another of Buika’s artist admirers, made a few years ago when he said, “Seeing her draw from such different genres as coplas, tango, bulerias, bolero, Cuban music and jazz, mix them altogether with such grace and spontaneity, one cannot help but think that there is a brighter future as long as one can witness the boundless evolution of this infinite performer.” Indeed, Almodovar helped introduce Buika to a wider audience worldwide when he cast her in his 2011 psychological thriller The Skin I Live In. Upon the release of that film, Warner Music issued the double-LP collection of Buika recordings En Mi Piel (In My Skin) to meet a growing demand for her music in the U.S.

Buika has experienced a meteoric rise since her introduction to the American marketplace in 2007 with the album Mi Niña Lola (My Little Girl Lola), winning awards as well as lavish praise from The New York Times, The New Yorker, The Miami Herald and NPR. Vivir Sin Miedo follows Buika’s acclaimed 2013 release La Noche Más Larga, which won a Latin Grammy and received a Grammy nomination in the Best Latin Jazz Album category. She recorded that album in Madrid, Miami, and New York, with a dazzling group of musicians including Latin jazz luminaries Dafnis Prieto (drums), John Benítez (bass) and Pedrito Martínez (percussion), a top-flight combo with the chops and imagination to match the singer’s disregard for genre boundaries.

In the spring, Buika will perform material from Vivir Sin Miedo, with a new band, at prestigious concert halls across the U.S., including Walt Disney Concert Hall in Los Angeles and Carnegie Hall in New York. The group—with musicians from the U.S., the U.K., Spain, Cuba, Denmark and Sweden who have collaborated with the likes of Paul McCartney and Chrissie Hynde—debuted this week in a season-opening concert at Prague’s Státní Opera, and had the audience, to whom Buika was mostly unknown, on their feet, dancing. An itinerary of confirmed U.S. tour dates follows.