House of Horror will have great entertainment this year

Bolivar Feijoo August 3, 2015
“For years, House of Horror has been South Florida’s largest haunted attraction, but when USA Today listed this haunt in their top ten Halloween events, we knew we had something special,” said Nelson Albareda, House of Horror grounds taker. 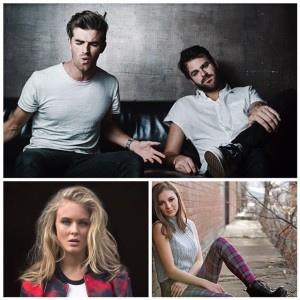 After 16 years of putting together South Florida’s #1 haunt,
House of Horror (HOH) has topped itself with the addition of new features and the highly anticipated performance of The Chainsmokers. Last year, Calvin Harris performed to a sold-out crowd, but this October 6, The Chainsmokers will take over the House of Horror stage along with top-charting artists, Daya and Zara Larsson.  Fresh off their MTV VMA performance, The Chainsmokers will sing all of their hits including the #1 single in the country ‘Closer’, which this month topped the Billboard Hot 100 for a third week.
“For years, House of Horror has been South Florida’s largest haunted attraction, but when USA Today listed this haunt in their top ten Halloween events, we knew we had something special,” said Nelson Albareda, House of Horror grounds caretaker. Each November, the team gets together to design next year’s creative, making this month-long experience a true-to-life encounter that’s both intense and appealing on a national level.  Because of its popularity, celebrities have been known to drop in with their families. In the past, they’ve had visits from Jennifer Lopez, Gente de Zona, Ja Rule, OMI, New Boyz, EDM artist Steve Aoki, Bow Bow, Glen Rice,Amar Stoudemire  and Silento, who did the Whip/Nae Nae during his walk-thru.
This year, creators are appealing to the fans of American Horror Story with the addition of Hellzapoppin, a world renowned theatrical rock ‘n roll, circus freak-show who will execute some of their deadliest stunts to a live audience. Expect to see fire breathing, glass eating, sword swallowing and other human oddities and curiosities on stage each night.  1455 Asylumwill offer what’s left of the overpopulated medical facility that was overrun by the mental patients who violently took over. Those who dare to walk those halls may come across some of the missing doctors and nurses. The Gates of Phobia will transport people into a world of skewed reality, where they’ll receive a 3D anxiety encounter that will haunt their souls and play with their senses. Everything from the fear of insects, reptiles, spiders and clowns to the fear of dizziness and enclosed spaces. Back by popular demand, HOH will offer The Dark Hour Monday thru Wednesdays, where visitors can walk the halls of the 1455 Asylum during a power outage between 10-11PM.
Also new for this year, Scare X Studios will serve as a movie theater in an old abandoned warehouse on the House of Horror grounds. Cult classic horror films, such as Nightmare on Elm Street, Halloween, The Omen, The Ring and Poltergeist will be featured each night. For those who can’t stomach the haunted house and/or the movies, they’re invited to venture into The Freak Emporium, which will offer a collection of bizarre items from around the world such as Alligator Boy, the Two-headed Siamese Baby Skull, remains of a Chupacabra, the Fiji Mermaid, and a Vintage Guillotine, to name a few.  Throughout the entire month, the Haunted Carnival will have plenty of rides for people to enjoy in between each scare.
House of Horror Haunted Carnival runs from September 29 – October 31 and is located at Miami International Mall at 1455 NW 107th Ave, Doral, FL 33172.

Joey Montana: ‘Picky Back To The Roots’