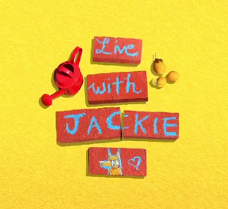 After making her mark on the music industry with the release of her highly anticipated album “Hijo de Chavez” and her recent anthemic single “Be Bad,” multi-faceted artist, singer, composer, and actress Jackie Cruz is exploring new ways to connect with her audience.
A passionate social activist, Cruz is continuing to serve as a positive light on social media with her new IG Live show “Live With Jackie.” Every Monday, Wednesday, and Friday at 11:11 AM PST, she invites fans to tune into her official Instagram account (@jackiecruz) as she conducts live interviews with a variety of the most popular figures in entertainment, such as Jesse y Joy’s Joy Huerta, “Queer Eye” star Tan France, and actress Francia Raísa. Each show also features spectacular performances from select musical guests.
Today Cruz will broadcast live once again, this time with singer and actor Anthony Ramos, who previously starred alongside Lady Gaga in “A Star Is Born” and will star in the upcoming musical film “In the Heights.” DJ and radio personality Traci Steele will also join the show with a special set.
Información y fotografía cortesía The 3 Collective