LARY OVER kicks off his European Tour 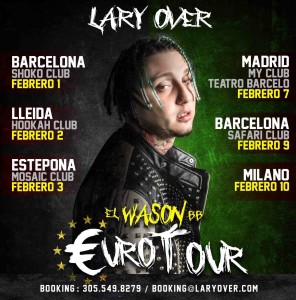 Latin Trap breakthrough artist, LARY OVER kicks off his European Tour today. Bringing his music to multiple cities, Lary will capture the audience like no other while performing the highly viral hit singles that have racked up impressive numbers online.

The Euro Tour will commence in Barcelona, Spain today. Lary Over will journey out to other important cities of Spain including, Lleida on Feb.2, Estepona on Feb.3, Madrid on Feb.7, and Barcelona on Feb.9. The tour concludes in Milan, Italy on Feb.10.

Earlier this month Lary spoke about his debut album which is set to release in the upcoming weeks.

Lary commented, “I am working on the final details of my debut album. My fans have been asking for an album and I am so excited to be working hard to please them everyday. This is Carbon Fiber Music Baby!”

Lary Over has become a movement across Latin America, the United States and Europe, and in 2017 built a strong fan base and developed an image like no other artist in his genre. Known as “El Wason” (The Joker), this showman is here to stay and is sure to deliver the best of Latin Trap music for his Jokers and Harley Queens for years to come.

Tagged with: LARY OVER