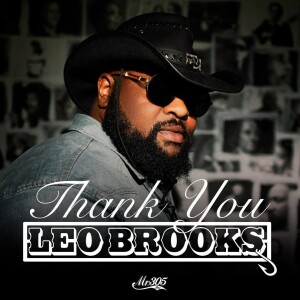 Making the jump from songwriter, producer, musician, and Pitbull collaborator to country upstart, Miami-born Honduran phenomenon Leo Brooks drops his debut single “Thank You” via Mr. 305 Records. Get it HERE.

The track proudly puts his singular style on display, integrating “booty-shaking kick drums and 808s” within a traditional twang. Leo’s dad rips on the harmonica as acoustic guitar rustles up gratitude during a hummable hook dedicated to the friends and family who inspired him to bring his dream to life. The accompanying music video reflects the warmth of the lyrics and message.

Leo connected to country as a kid, but took the scenic route to find his place in the genre. Straight out of high school, he logged a decade with Lauryn Hill as bassist and eventual music director before joining “Team Pitbull” on stage as a bassist in the studio as a trusted collaborator. As a writer on a Latin GRAMMY® Award winning song “Echa Pa’lla (Manos Pa’rriba)” with “Mr. Worldwide,” he finally makes his solo debut with “Thank You” and music on the horizon.

Expect a whole lot more from Leo Brooks soon and be sure to tell him “Thank You” for the game-changing country anthems!