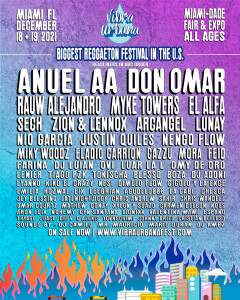 As one of the fastest growing Latin festivals in the United States, Vibra Urbana was proud to announce its 2021 Miami, Florida stop after a very successful event in Orlando, Florida in August 2021. The inaugural event festival held in February 2020 at the Watsco Center at the University of Miami was sold-out. The overwhelming success of the first Vibra Urbana led the creators to expand the brand to Orlando in July 2021, which was a two day sold-out event.

Founded by Miami natives, Vibra Urbana was born through their passion for bringing together fans of Latin music in the United States, by creating an experience for the reggaeton community to enjoy performances by their favorite artists.

With safety as the utmost priority, organizers are working with city and county officials to determine guidelines regarding COVID protocols and will be communicating updates via their official social media channels as they are ready.

JENNIFER LÓPEZ lanza nuevo sencillo “On My Way (Marry Me)”